Shortly after Chris and Bill started working together at another music company, we discovered we were born only hours apart. Same day. Same year. It just made sense we should start a company together. So in 1995 we found the coolest little building in the coolest part of town – and rippleFX: was born. Waaaaaaaaah!

We like to have fun – lots of fun. But we take our work seriously. Clients have told us that we sometimes act like an old married couple. Is it the thinly concealed contempt? The overt contempt? Whatever. We want to assure you that we are not. For one thing, Bill wears shoes. Chris doesn’t. Chris wears pants. Bill…you get the picture.

We’ve had a few very tolerant office managers. Some not so tolerant. Who could blame them? Many of them were singers. Some definitely weren’t. Most recently, Mina, who is an accomplished musician in her own write (pun intended) suffered our awful jokes with nary a furrowed brow, and hasn’t yet reached the point where she ignores us completely.

As of November 12, 2010, rippleFX: incorporated ceased operating as a corporation. rippleFX:studios continues operations as a consortium of three freelancers. It's the new normal.

Our goal still is to combine music composition, performance and technology, with a very comfortable and creative studio environment and thus provide a full service music production experience for creative artists and creative producers.

We love music. We love recording. Welcome to rippleFX:studios 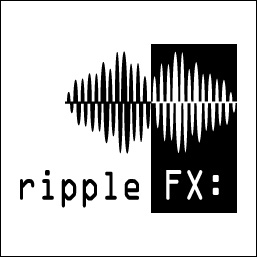 In 1989, Chris became the first commercial engineer in Indianapolis to use a digital audio editing system. Called SoundTools, it displayed the audio waveform in beautiful monochrome. In 1995, Burl Seslar designed our logo based on the look of that waveform. He combined it with the simplicity of a computer icon, added the OCRA type font, and rippleFX: had its visual identity. 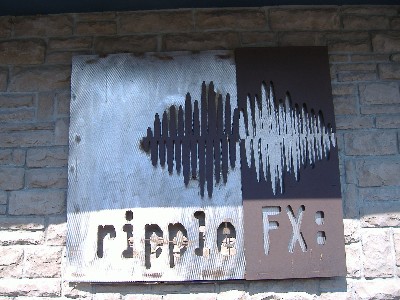 Soon after moving into our building, we realized we needed a sign. But because this is Broad Ripple, not just any old sign would do. So we asked our friend Greg Perry, who is as handy with a pen as he is with a torch, to make us a sign appropriate for the neighborhood. Yes, that's half-inch thick steel and yes, it is quite heavy.

To celebrate our 10th anniversary, we asked our good friend, Chris Pyle to put his unique spin on our logo. Chris is a nationally known illustrator from Indianapolis whose work has appeared in Time Magazine, Sports Illustrated, Rolling Stone and many others. Check him out here. Chris is also one heck of a great drummer.

The latest design was conceived by the very talented Lydia Whitehead at Smallbox Consulting. Her blending of the elements of our previous designs with a fresh feel really caught our eye.